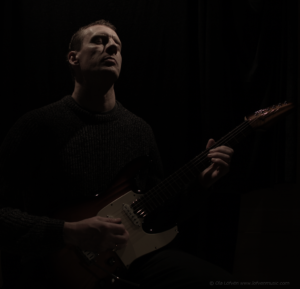 Ola was born in Sweden 1969, and raised in a rather conservative home. Exposed to the music of Glenn Miller, Louis Armstrong and Jussi Björling, Ola realized that further expanding the musical horizons requires openness and curiosity. At the age of 10 Ola was enrolled in the municipal music school for trumpet, and dropped out six years later as the strict and disciplinary methods gave little room for creativity. At the age of 15 Ola picked up the electric guitar, and this instrument was now explored with a great amount of creative freedom.

Taking private lessons pushed his skills further, but limitations in such methods and also the lack of ambition amongst fellow musicians led to an enrollment at Musicians Institute in Hollywood CA in 1993.

Ola never aimed at becoming a guitar hero (even though classmates claimed "he had it all figured out"), and when returning back to Sweden he focused on songwriting. Even though major publishers expressed interest in some of his work, it never led to a songwriting career. On the contrary, he was caught in a downward spiral that steadily consumed the creativity and joy of music.

In 1999 Ola dropped music entirely, and enjoyed family life. The relationship to music, that had been such a big part of his life, now was hanging over him as a black cloud. Even listening to music could bring uncomfortable emotions and stress.

One night in 2011, with no warning, everything fell into place. In one of his "thought sessions" it became clear to him that the crashed love affair with music could actually be mended. This required a complete re-evaluation of his approach to music.

Ola is now composing, recording, and releasing music with a completely new philosophy. Music has to be rooted in heart and soul, and to allow total creative freedom and genuine music, Ola will never give in to expectations from the music industry or any standards set by peers. Such approach may of course set limitations on music as a career, but in return Ola´s music is derived from a foundation of mindfulness, heart and soul.

It is important to understand that even if Ola´s music is labeled as progressive rock or jazz, one should realize that styles and influences will vary. Only expect the unexpected, and embrace it with an open mind and an open heart.

I am right here and right now. So is my music. As an independent artist I´m free to compose and publish my music at my own pace. I´m also free to adopt or form any style of music as I wish. It may look like I don´t have clear goal, but on the contrary my goal is to further explore new styles and continue to develop my own style. I will continue to compose and publish my own music, and it´s not an easy task to guess what style my next album will be. Where others see it difficult to put a label on my music, I only see artistic freedom. It might prevent a more solid music career, but that´s how I want it to be.

I truly believe that my approach to my music makes it possible for all other elements fit in my life, such as having a regular day job and a family. Collaborations, projects and bands? If my heart tells me it´s right, then it is. It will probably be easier to get my attention with an interesting idea, rather than promises of stardom and fortune.

© Ola Löfvén – content on this page may be used for press purposes without explicit permission. Ola Löfvén Biography is published at StoryAmp.

Share and Enjoy: These icons link to social bookmarking sites where readers can share and discover new web pages.